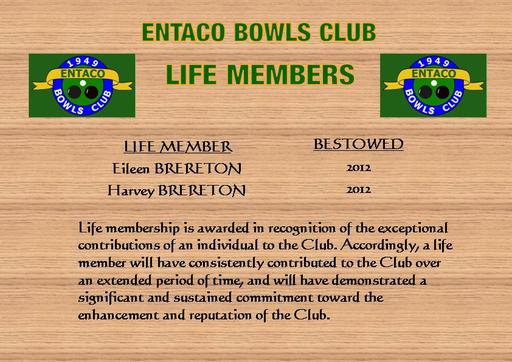 A proposal was made by the Committee and accepted by a unanimous vote at the AGM that Eileen and Harvey be awarded Life Membership of Entaco Bowls Club in recognition for over 40 years loyal and continuous service.
Congratulations to both and may you enjoy many more years with the Club.
9th November 2012...Friday...AGM
Please come along to this meeting. Tickets for the Skittles evening will be available also.
29th October 2012...Monday...Committee meeting held...2:30 pm at the Club house.
13th October 2012...Saturday...Presentation Evening
Tickets are now available for our annual Presentation evening. As well as handing out the club trophies and honours we shall again be enjoying live music, a quiz, a raffle & Irish bingo. A ploughman's supper will  be provided. Please come along, bring friends and family. Tickets are £4 and can be had from Karen Rice and Margaret Pratt.
24th September 2012...Monday...Committee meeting held....2:30pm at the Club house.
23rd July...Monday...Committee meeting held...2:30 pm at the Club house
1st July 2012...Sunday   Gala day...2:00 pm.
Thirty two members enjoyed an afternoon of 'friendly competitive' play over four matches of  six ends rinks  bowling.
We started with a group photo, click here to see, followed by an all bowl spider for a bottle of whiskey. Bob Lapsley finishing closest to win the bottle.
The ultimate Gala winner was Eileen Brereton closely followed by Peter Bryan and new member Clive Berry in third place.
Afterwards we all had a cup of tea and tucked into a great table of food brought in by all members. Our thanks to Margaret Pratt for organising the event and Pete Smith for keeping score.
13th June 2012...Wednesday...Committee meeting...2:30 pm at the Club house. 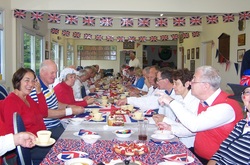 An afternoon of fun on and around the Green!
See more photos in Photos-Events section

May 2012...a new small bowls equipment shop has opened near Redditch. Situated within Fatboys retail shop at Tardebigge Court it has  a small stock of bowls equipment and trades under the Bowls4U heading. It is also able to order items from many of the well known bowls makers.  For the Bowls4U site click here.

After the wettest April for many years the approach to the club became very wet and muddy.
The Saturday morning gang spent a couple of hours laying  an improved path to we can all
keep our feet dry and our whites clean!. More photos in the 'Photos-Events' section.
7th May...Monday...Committee meeting...2:30 pm at the club house.
21st April 2012...Saturday...First match of the season
Presidents v Captains Teams.
19th April 2012...Green opens...2:00 pm onwards.
14th April...Saturday...Pre- season clean up...9:00 am onwards
Join us this morning while we clean up the clubhouse and around the green in preparation for the start of the 2012 season. Everyone welcome.
12 & 13th April...Thursday & Friday...Subs are due..pay at the clubhouse...6:00 pm onwards
26th March 2012... Monday...Committee Meeting...2:30 pm
17th March 2012...Saturday...Race Night
Get your tickets for another hectic night of horse racing!
23rd January 2012...Monday...Committee meeting...2:30 pm 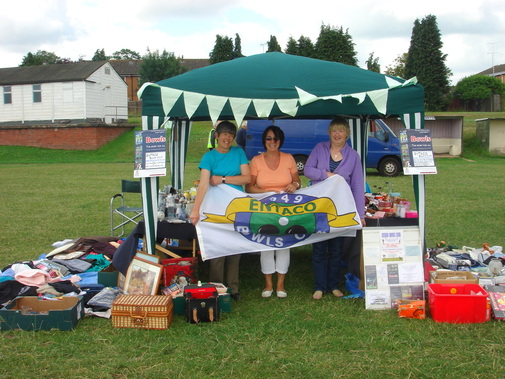 11th December 2010...Saturday...Skittles Evening.
All meet at the HDA club for a prompt start at 7:30pm. Please bring food for an 'American style' supper.
6th Dec 2010...Monday...Committee Meeting (note changed date..was 13th Dec.)
Meeting held at 2:30pm at the Presidents home.....freezing cold at the club!!
21 November 2010..Indoors match at Solihull.
A good win for Entaco to start the indoor matches.
12th November 2010...Friday...AGM
This years AGM took place at the SSSC. It was well attended with close on 50 members present. The committee for 2011 was agreed along with a decision to buy a commercial dishwasher, funds permitting. See AGM section for more details.
25th October 2010...Monday...Committee Meeting
Committee meeting held at 2pm in the pavilion.
25th September 2010..Saturday..End of season work on the green.
A working party of slaves needed to dress the green in preparation for next season. Please come along and lend a hand. Lots of shovelling, brushing and dragging to do! Starts at 8:30 sharp and should be done before mid-day.
17th Sept 2010...Friday...Presentation Evening
Presentation evening starts at 7:00pm and will be held at the club pavilion this year. As well as the trophies being handed out there will be a fish & chip supper and a social evening. Even if you are not a winner this year please give your support to this event. Just £5 each covers the supper.
12th Sept 2010...Sunday...Finals Day
Here we are once again at Finals Day. The first matches start at 10:00 am. All members are welcome to come along to cheer on the finalists. See you there. Link to the Finals day results & photos.
23rd August 2010...Monday...Committee Meeting
Committee meeting held today at  7:00pm.
14th August 2010...Saturday...Weston Subedge Gala
Congratulations to the winning team of Margaret Andrew, Maureen Smith, Judy Warner & Helen Goodman. These Entaco ladies won the Weston Subedge Gala on Saturday despite the very wet weather. Wiinning prize was a silver photo frame...just need to take that team photo to add the finishing touch. Well done ladies!
13th August 2010...Friday... hedge cutting.
A small group of volunteers cut the hedges in record time. Took about an hour and just before the heavans opened! Thanks to Les, Kelvin, Chris H, Royston, Mike W, Karen, Judy, Harvey & Mike B.
10th August 2010...Tuesday...Interberga League update.
The final match of the season saw Entaco gain just 3 points against Barbourne. However we had enough points in hand to ensure we  stayed top of the league. A fine season for Entaco with 12 wins from 14 matches played. The season ended with the top three positions thus:- Entaco on 143 points, Barbourne on 116 and Bromsgrove-Joy on 98.
3rd August 2010...Tuesday...Interberga League update
Another hard fought win for Entaco against Community. Twelve points to be added to the total mean we can't be toppled  from top place going in to the last game next week at Barbourne.
Tonights Teams:  Top to bottom rows below where: -Rink 4:- Barbara, Mike & Judy. Rink 3:-Brian, Chris & Judy. Rink 2:- Les, Kelvin & Eileen. 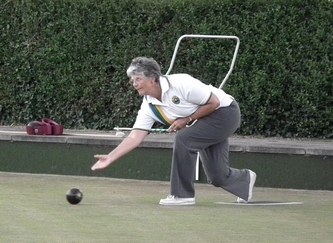 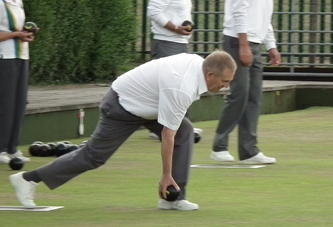 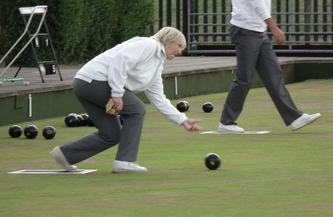 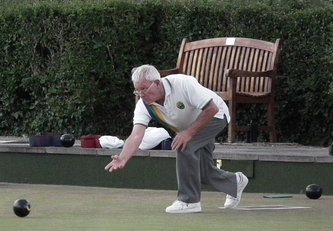 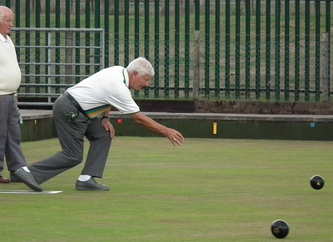 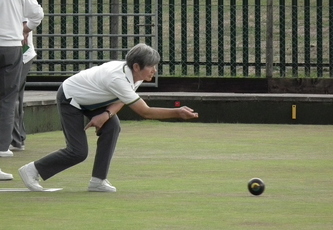 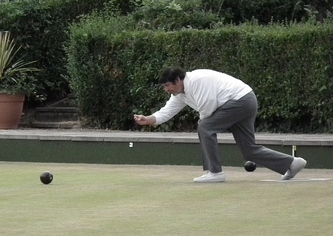 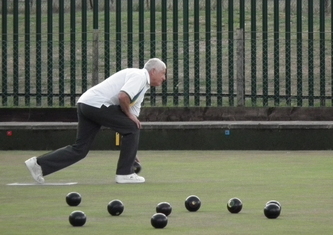 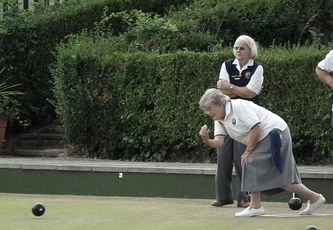 27th July 2010...Tuesday...Interberga League update.
With more wins this month against Inkberrow, Droitwich Spa and Hewell we now head the league by 33 points with only two games remaining.  Well done to all the Entaco Interberga players for a great season.
6th July 2010...Tuesday..Interberga League update.
A good home win against Bromsgrove today and a further 10  points.
Before  today's match Entaco are leading this league with 7 wins out of the 8 games played.
With a total of 84 points we were 13 points clear of Barbourne, in second place, before the latest results are taken into account.
3rd July 2010...Saturday
Gala Day... Over 30 members took part in the Gala Day. Starting with a game of Spider. where all bowled towards the jack in the centre of the green. No one hit the jack but the closest and winner of the bottle of whisky was Brian Fryer.
Then followed three games of eight ends of rinks bowling. Teams where chosen at random for each game. The player who totalled the most shots over the three games won.
The winner this year, and recipient of the Presidents Cup, is Margaret Andrew with 36 shots. Close runners up where Brian Fryer, 31 shots, and Clive Andrew, 30 shots.
Thanks to all who took part on such a warm, sunny and friendly afternoon.
28 June 2010...Monday
Committee meeting held....7pm at the club. 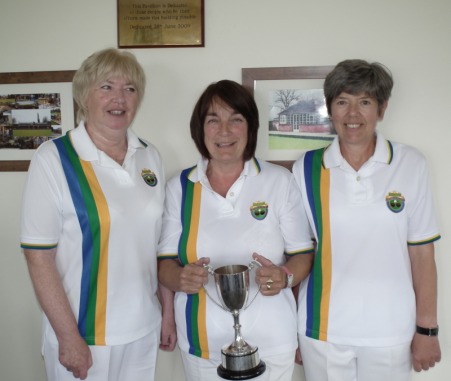 Entaco lady bowlers (L to R) Judy Warner,  Karen Rice and Judy Husband win the Hewell Ladies Triples Trophy competed for at the recent Hewell Gala Day. Well done ladies!
15th June2010...Tuesday
Working party needed to cut the hedges & tidy up....contact Les Husband.
15th May 2010...Saturday
Entaco managed a narrow 3 matches to 2 win, at Wellsbourne, in the Top Club competition, first round.
17th May 2010... Monday
Committee meeting held at the Clubhouse.
24th April 2010...Saturday
Our first match of the season starts with the traditional President v Captain game. See newsletter for details. A win for the Presidents team at 134 to 95. See photos under the events section.
22 & 23rd April 2010...Thursday & Friday
Annual subs are due and payment can be made at the Clubhouse on Thursday from 6:00pm and Friday between 6:00 and 7:00pm. See newsletter for amounts due.
19th April... Monday
Committee meeting held- 2:00pm start..at the Clubhouse.
Now 17th April 2010...Saturday (revised date..was previously 10th April)
Club Members......We are having a working day on the green and in the pavilion. Please come along and give a hand, starting at 9:00am.
13th March 2010...Saturday
Race Evening...Another full house which we hope everyone enjoyed including the delicious Fish & Chip supper.
11th March 2010...Thursday
Committee Meeting held at club-2:30pm start. See March 2010 Newsletter for latest match and club information.
6th March 2010...Saturday
Indoor match against Welford...6 Mixed rinks...2.00pm start...whites
A very enjoyable afternoon, only slightly spoiled by Welford taking a narrow victory, 99 to 96! Well done Welford.
During the tea break Les Husband publically thanked Chris Pearce for being Entaco's Captain and organiser for the 2009/2010 indoor games. Thanks from all of us Chris.
7th Feb 2010...Sunday
Indoor match against Bromsgrove...6 Mixed rinks...2.30pm start...whites..... A second win in 2010!
25th Jan 2010...Monday
Committee meeting held at Club. Newsletter to follow.
9th Jan 2010...Saturday
Indoor Match against Welford...6 Mixed rinks...2.00pm start...whites
Despite the snow and ice this fixture went ahead. A good start to the New year with a 159 to 87 win for Entaco. (Link to photos)